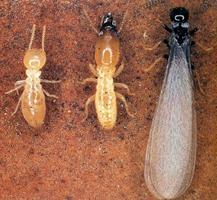 Eastern Subterranean Termites are the most common termite found in North America and are the most economically important wood destroying insect in the United States. An average colony consists of 60,000 to 20,00 individuals, but colonies numbering in the millions are possible.
All termites are social insects that live in large colonies functioning together to support the needs of the colony. Colonies are comprised of three cases: reproductives, soldiers, and workers who do the work of the colony. The colony is usually located in the soil, workers use the soil to build tunnels to reach structural wood upon which they feed. Termite digest wood with the help of special organisms in their digestive system.